As discussed in the previous post, O’Brian’s Richard Canning, despite his aptitude and desire to be a naval officer, was excluded from the world of martial honor because he was a Jew. Thus, the naval officer Stephen Maturin strangely honors

Canning by noticing Canning’s insult and challenging him to a duel. The theme of Jews being shut out of the world of honor is also quite prominent in Walter Scott’s Ivanhoe. This time it is a Jewish woman, Rebecca, who is barred from assuming the social station her talents and natural nobility entitle her to. In this post, I focus on the way religion and notions of purity differ from the warrior-aristocratic norms of honor, and note how Scott skillfully uses medieval anti-Semitism to contrast these two ethics.

Several of Scott’s novels reveal his disdain for the way feelings of religious bigotry distort the genuine ranking of men and women (to see this with regard to Christianity vs. Islam, see The Talisman). Scott seemed to be perfectly aware of the different moral-psychological systems people operate by, and he resented how the moral-psychological framework based on purity conspired with religious (and sometimes racial) categorizations in ways detrimental to honorable conduct.

According to some recent social- and cultural-psychology, a purity-based ethic sees moral goodness and rightness in terms of purity, wholesomeness, naturalness and (at its extreme) holiness. It sees moral evil and wrongness in terms of corruption, defilement, contagion, and perversity. Disgust and horror are the main condemnatory emotions of this ethos. Purity reasoning is particularly prominent in religious and racist discourse, and purity reasoning helps explain why religious and ethnic conflicts are so brutal. In the rhetoric of such conflicts, the nation (“body politic”) or geographical area (“holy land”) needs to be “cleansed” or “purged” of the target group, who is seen as polluting, dirty, sickly, and corrupting. In contrast to honor-based conflict, antagonists aren’t seen as respectable competitors who are perfectly unobjectionable. Rather, on purity reasoning the targets of aggression are “filthy animals” or “scum.”

If you combine purity reasoning with military skill, you get a particularly terrifying result. And those results were what the Knights Templar, a medieval religious martial order, were meant to effect. Scott pretty reliably casts Knights Templar—“half monks, half soldiers”—as villains. He hated the chimerical nature of that

order, which aspired to both to represent the Christian virtues of piety, purity, obedience, and humility and the honor-based virtues of martial valor and chivalry. Because they follow two codes and not one, holy warriors can easily switch between the logics of these moral systems whenever it suits their basest interests. For instance, if shaking-down a defenseless but rich merchant is to your advantage, the dishonorableness of this can be set aside because the merchant is a Jew (a reoccurring rationale in Ivanhoe). In men at least, Scott favors a barely-Christianized warrior-aristocrat who might acknowledge in reflective moments the incompatibility of his honor-motives and his Christian faith, but who nonetheless fights battles of choice in pursuit of glory.

Scott understood how quickly we could switch back and forth between the two ethical frameworks of purity and honor, as demonstrated in a climactic scene in which Rebecca is being tried for sorcery. Previously the book’s villain, a high-ranking templar named Brian Bois-Guilbert, became infatuated with Rebecca and kidnapped her. After it was discovered that Bois-Guilbert “stained and polluted” the Templar castle by keeping a Jewish maiden confined there, Bois-Guilbert’s supporters accuse Rebecca of placing a spell on him.

Just before her trial for witchcraft, Bois-Guilbert slips Rebecca a small scroll, which she tucks away without reading. Rebecca defends herself cogently and eloquently, but of course her guilt is assumed from the outset. Finally, just before the judge, the Templar Grand Master Lucas Beaumanoir, pronounces Rebecca’s doom, Bois-Guilbert shouts out, “The scroll, the scroll!” Rebecca pulls out and opens the scroll, which reads, “Demand a champion.”

“There is yet one chance of life left to me,” said Rebecca, “even by your own fierce laws. Life has been miserable—miserable, at least, of late—but I will not cast away the gift of God, while he affords me the means of defending it. I deny this charge—I maintain my innocence, and I declare the falsehood of this accusation—I challenge the privilege of trial by combat, and will appear by my champion.”

“And who, Rebecca,” replied the Grand Master, “will lay lance in rest for a sorceress? who will be the champion of a Jewess?”

“God will raise me up a champion,” said Rebecca—“It cannot be that in merry England—the hospitable, the generous, the free, where so many are ready to peril their lives for honour, there will not be found one to fight for justice. But it is enough that I challenge the trial by combat—there lies my gage.”

She took her embroidered glove from her hand, and flung it down before the Grand Master with an air of mingled simplicity and dignity, which excited universal surprise and admiration.

Rebecca’s demand for a champion, and her invocation of English honor, triggers the previous dormant honor intuitions of those assembled. The Grand Master, who was seconds ago happy to have Rebecca burned at the stake as a witch, suddenly sees at Rebecca with new eyes. She has pressed his “honor buttons” so to speak, and the next few paragraphs display Scott’s moral-psychological sensitivity to how the purity and honor impulses can wrestle for supremacy.

Even Lucas Beaumanoir himself was affected by the mien and appearance of Rebecca. He was not originally a cruel or even a severe man; but with passions by nature cold, and with a high, though mistaken, sense of duty, his heart had been gradually hardened by the ascetic life which he pursued, the supreme power which he enjoyed, and the supposed necessity of subduing infidelity and eradicating heresy, which he conceived peculiarly incumbent on him. His features relaxed in their usual severity as he gazed upon the beautiful creature before him, alone, unfriended, and defending herself with so much spirit and courage. He crossed himself twice, as doubting whence arose the unwonted softening of a heart, which on such occasions used to resemble in hardness the steel of his sword. At length he spoke.

“Damsel,” he said, “if the pity I feel for thee arise from any practice thine evil arts have made on me, great is thy guilt. But I rather judge it the kinder feelings of nature, which grieves that so goodly a form should be a vessel of perdition. Repent, my daughter—confess thy witchcrafts—turn thee from thine evil faith—embrace this holy emblem, and all shall yet be well with thee here and hereafter. In some sisterhood of the strictest order, shalt thou have time for prayer and fitting penance, and that repentance not to be repented of. This do and live—what has the law of Moses done for thee that thou shouldest die for it?” 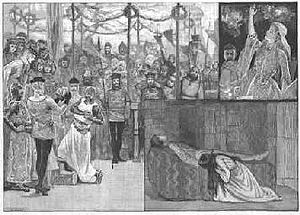 “It was the law of my fathers,” said Rebecca; “it was delivered in thunders and in storms upon the mountain of Sinai, in cloud and in fire. This, if ye are Christians, ye believe—it is, you say, recalled; but so my teachers have not taught me.”

“Let our chaplain,” said Beaumanoir, “stand forth, and tell this obstinate infidel—”

“Forgive the interruption,” said Rebecca, meekly; “I am a maiden, unskilled to dispute for my religion, but I can die for it, if it be God’s will.—Let me pray your answer to my demand of a champion.”

“Give me her glove,” said Beaumanoir. “This is indeed,” he continued, as he looked at the flimsy texture and slender fingers, “a slight and frail gage for a purpose so deadly!—Seest thou, Rebecca, as this thin and light glove of thine is to one of our heavy steel gauntlets, so is thy cause to that of the Temple, for it is our Order which thou hast defied.”

“Cast my innocence into the scale,” answered Rebecca, “and the glove of silk shall outweigh the glove of iron.”

“Then thou dost persist in thy refusal to confess thy guilt, and in that bold challenge which thou hast made?”

“So be it then, in the name of Heaven,” said the Grand Master; “and may God show the right!”

“Amen,” replied the Preceptors around him, and the word was deeply echoed by the whole assembly.

“Brethren,” said Beaumanoir, “you are aware that we might well have refused to this woman the benefit of the trial by combat—but though a Jewess and an unbeliever, she is also a stranger and defenceless, and God forbid that she should ask the benefit of our mild laws, and that it should be refused to her. Moreover, we are knights and soldiers as well as men of religion, and shame it were to us upon any pretence, to refuse proffered combat. Thus, therefore, stands the case. Rebecca, the daughter of Isaac of York, is, by many frequent and suspicious circumstances, defamed of sorcery practised on the person of a noble knight of our holy Order, and hath challenged the combat in proof of her innocence. To whom, reverend brethren, is it your opinion that we should deliver the gage of battle, naming him, at the same time, to be our champion on the field?”

Ironically, Bois-Guilbert, who planned to defend Rebecca in the lists, is chosen to champion the Order, and his old rival, Ivanhoe, appears at the last minute to defend Rebecca. Ivanhoe is weak and wounded from an earlier battle, so Bois-Guilbert suggests a delay until Ivanhoe is stronger. Ivanhoe refuses. This places Bois-Guilbert into the impossible position of having to fight for his honor in a cause which, should he win, would result in his beloved Rebecca’s execution. The champions joust; and although Ivanhoe’s lance barely touches Bois-Guilbert, the templar falls down dead, “a victim,” we are told, “to the violence of his own contending passions.”

2 thoughts on “Jews and honor in literature, pt. 2: honor vs. purity”