The new MLK memorial on the National Mall will be modified in the upcoming months. It currently has an inscription reading, “I WAS A DRUM MAJOR FOR JUSTICE PEACE AND RIGHTEOUSNESS.” The passage has been criticized by some of King’s descendants and custodians of his memory as sounding vain. They point to the actual sermon this quote came from, in which King outlines how he’d like to be remembered at his funeral: 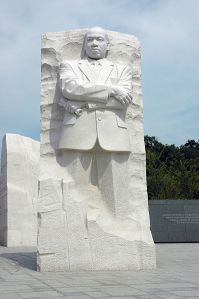 In talking about a “drum major,” King is referencing a 1952 sermon by a white, liberal Methodist preacher named J. Wallace Hamilton called “Drum Major Instincts.” King liked the tag for what he apparently thought was an innate drive for recognition and glory.

You can find King’s sermon (in text and audio form) here. It is quite good, and raises some interesting points for honor research.